1. The price is right. The median single-family home price hit its lowest in more than a decade when it reached $154,600 in January, according to the National Association of REALTORS®. That was the lowest since October 2001. During the height of the housing market in July 2006, the median home price for a single-family home was $230,900.

2. It’s cheaper to buy than rent. In nearly every major metro market, it is cheaper to buy a home than rent. Rents have been on the rise the last few years and are predicted to continue to rise. Meanwhile, home affordability is at record highs, which means that buying a home is more within reach to the median income family.

3. Inventories of for-sale homes are shrinking. Ned Davis Research estimates that excess inventories of homes to be eliminated by the end of next year. “When excess supply dries up, people start building more new houses, which has the virtuous effect of reducing the unemployment rate and increasing the economy generally,” according to the USA Today article.

4. Mortgage rates are at record lows. Mortgage rates have hovered near record lows for weeks, which has helped pushing housing affordability higher. For example, the average 30-year fixed-rate mortgage, which is the most popular among home buyers, is 3.59 percent, according to Freddie Mac—just above its record low set on July 26 of 3.49 percent average. “It’s conceivable that at some point in the next 30 years, your interest rate would be less than the rate of inflation,” writes Waggoner for USA Today.

No Co Stats for July 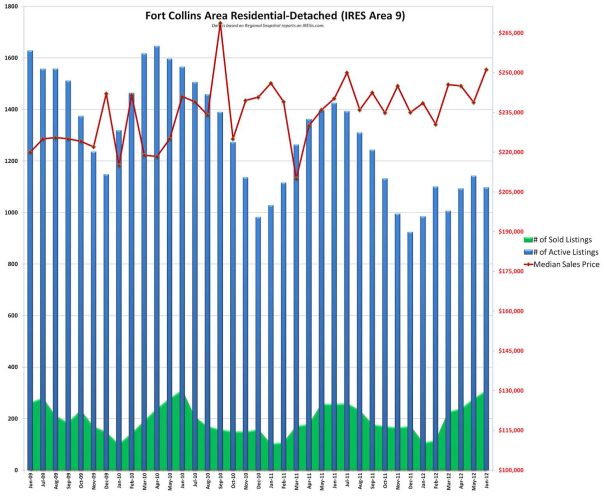 Sales are UP, number of homes for sale are DOWN, sales prices are UP – All good news here!!!